The December 2014 issue of HKU's Bulletin featured three stories from the Faculty of Law. The first two relate to the cover story of "Growing Pains: Consequences of China's Economic Miracle".

Greasing Palms: A HK$30 Billion Industry
Hong Kong is home to one of the world’s leading anti-corruption agencies, the Independent Commission Against Corruption (ICAC), which celebrates its 40ᵗʰ anniversary this year. Despite that, the city is likely exporting about HK$30 billion in corruption to developing countries, mainly Mainland China, each year.  That is the finding of Dr Bryane Michael, former Columbia University Professor and currently a Senior Research Assistant in the Department of Law, who has advised 27 countries on anti-corruption measures and who has been looking at how Hong Kong compares to the rest of the world...Another major hurdle is the ICAC itself. Professor Simon Young, who has traced the historical development of the agency since its founding in 1974, describes it as being in the throes of a crisis of confidence.... Click here to read the full article.

Rags and Riches in the Luxury Trade
The HiPhone in China makes no bones about which brand it is imitating. It looks like an iPhone and its advertising slogan is ‘Not an iPhone but better than an iPhone’. Does it matter that it uses the Apple brand to promote itself?   Sun Haochen, Assistant Professor in Law, has been considering this issue from both legal and social justice perspectives. He has written two academic papers, lectured to government officials, organised an international conference and is preparing to launch a blog on the topic.  The HiPhone, he explained, is part of the shanzhai phenomenon in China in which companies violate IP laws or take advantage of grey areas by copying others’ property, either directly or in more creative ways. This was not necessarily a bad thing, he said.  Click here to read the full article. 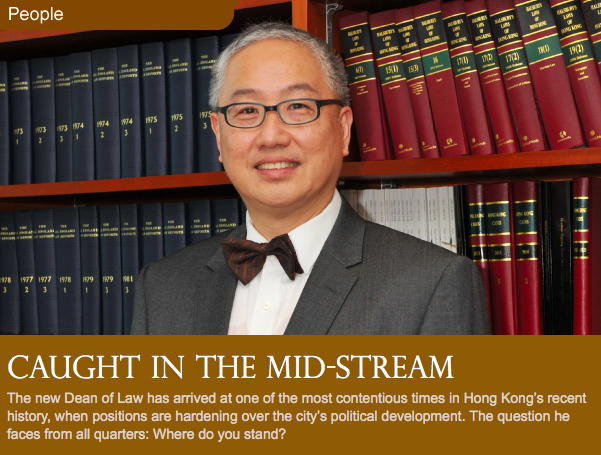 Caught in the Mid-Stream
Professor Michael Hor Yew-meng became Dean of Law on July 1, a day that saw hordes of people protest on the street for greater democracy in Hong Kong. Some members of his Faculty are organisers of the Occupy Central movement to increase democracy, others advocate a more conservative approach. Professor Hor himself was busy getting moved in on that day, but the former National University of Singapore (NUS) Professor has taken a keen interest in the debate. He has no choice.  “The press keeps trying to draw me into one camp or the other,” he lamented. “What I consistently tell them is, what’s the point of me saying I support Occupy Central or I support Beijing? Is it going to solve the problem? Obviously it’s not.  “What the Faculty has done and should continue to do is to preserve freedom of speech and thought, and academic freedom, and maintain a liberal atmosphere so all these different ideas can be developed and flourish and contend with each other.”  Click here to read the full article.