"Hong Kong can lead the way in taking stock of law firms"
Bryane Michael
South China Morning Post
10 March 2015
Should Hong Kong's law firms have the right to sell shares on the stock market? A debate is raging among scholars, lawmakers and lawyers themselves. Countries such as Australia have allowed a few law firms to list. Britain and the United States have debated for years ways of opening up their legal professions to competition and innovation. Why shouldn't retail investors have the right to share in lawyers' good fortune (and high fees)? In our recent paper in the Law Society journal, Hong Kong Lawyer, Ajay Shamdasani and I looked at the potential benefits of allowing law firms to list. We calculate that the top 25 firms in the city would have a combined market capitalisation of more than US$8 billion. Such a capitalisation would add depth to Hong Kong Exchanges and Clearing and encourage openness... Click here to read the full article.
Dr Bryane Michael is a Fellow of the Asian Institute of International Financial Law (AIIFL) and specialises in the use of economic analysis in legal drafting (Twitter: @BryaneBryane).  Some of his recent publications include the following:

Journal of Financial Crime
Vol. 22, Issue 1, pp 126-150
Abstract:  The purpose of this article is to assess the extent to which Hong Kong’s laws deter its companies from engaging in corruption and bribery abroad. A mix of economics, public administration, management and legal analysis was used to assess weaknesses in Hong Kong’s laws governing the prohibition of bribe payments abroad. Hong Kong does not explicitly criminalise corporate bribery abroad. Companies – as legal persons – can not be found guilty of corruption. It is argued that Hong Kong’s Legislative Council should amend various laws to modernise Hong Kong’s approach to tackling corruption committed by its companies abroad. The various approaches lawmakers can take towards assigning responsibility for corruption to companies are presented. The approaches that prosecutors at the Department of Justice can take to adopt prosecutorial methods like those used in other upper-income jurisdictions and the ways that Independent Commission Against Corruption (ICAC) can assist in this work are also described. This research has practical findings for Hong Kong’s policymakers, law firms and companies which operate in Hong Kong. For policymakers, we describe legal changes Hong Kong’s legislators will likely make in the years ahead and the preferred ways of engaging in such change. For law firms, we describe the legal changes coming to Hong Kong which legal advisors will need to advise their clients on. For companies, we describe changes that companies operating in Hong Kong will likely need to comply with in the future. This paper shows that when Hong Kong adopts best practice in the field of corporate criminalisation, Hong Kong’s role in “exporting” corruption will likely fall. This article describes a set of legal changes which will change the way Hong Kong treats corruption. The literature tends to glamorise Hong Kong’s anti-corruption work. It is shown that its law falls far behind other jurisdictions, as well as how “treating companies like people” in the case of Hong Kong will likely change the way Hong Kong’s prosecutors think about crime and criminal perpetrators.

"How Can the ICAC Help Foster the Widespread Adoption of Company Anticorruption Programs in Hong Kong?"
North Carolina Journal of International Law & Commercial Regulation
Vol. 40, Issue 2, Winter 2015, pp. 355-441
Introduction: Business measures against corruption represent the bulwark against bribery and other corruption offences in most upper- income jurisdictions. Businesses take these measures in response to the incentives legislation, executive regulations, and other rulemaking provides to them. As early as 1980, scholars documented the effect that anti-corruption law—and specifically the Foreign Corrupt Practices Act—has had on encouraging businesses to adopt changes to their accounting and compliance programs. Anti-corruption laws have had an impact on the measures businesses take to prevent, detect, and curb corruption committed by their agents and partners. These measures—in turn—significantly affect the extent of corruption committed by companies’ principals, agents, and partners. Yet, Hong Kong companies do not implement many of the common measures used to prevent and/or detect. As shown in this paper, Hong Kong’s companies rank among the worst in terms of implementing anti- corruption measures. Most of the blame falls on Hong Kong’s legislative framework (and the lack of incentives this framework provides)... 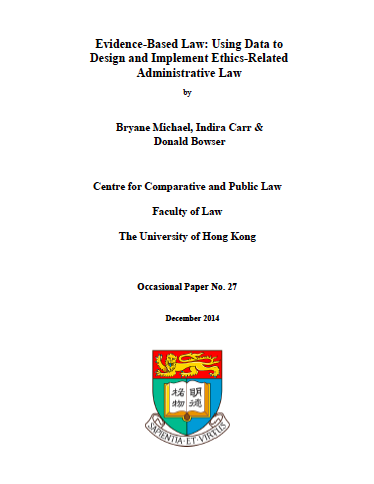 "Evidence-Based Law: Using Data to Design and Implement Ethics-Related Administrative Law"
Centre for Comparative and Public Law, Occasional Paper No. 27
December 2014
Abstract: The prosecution of high profile multi-national corporations (MNCs) over the past decade for bribery of public officials acting in their official capacity has raised the need for drafting ethics-related administrative law. So, how should countries draft ethics-related administrative law? Should such law be driven purely by normative ethics based on how one ought to act? Or, should we take into account empirical data in drafting ethics-related administrative law? A related question is who should oversee these ethics-related laws? This paper discusses the role of empirical data in deciding which provisions to include in ethics-related law and when deciding on the division of competencies between agency directors, ethics officers, human resource directors, internal auditors and others. We describe how to draft subsidiary legislation (mainly executive agency regulations) based on explicit or implied competencies given by national legislation. We then discuss how to conduct the organisational, legal, economic and audit analysis needed to allocate ethics related rights and obligations across-government and within the Agency. This paper serves as a lone counter-weight to the principles-based approaches flooding the literature. We illustrate our discussion largely using examples from Romania and Hungary.