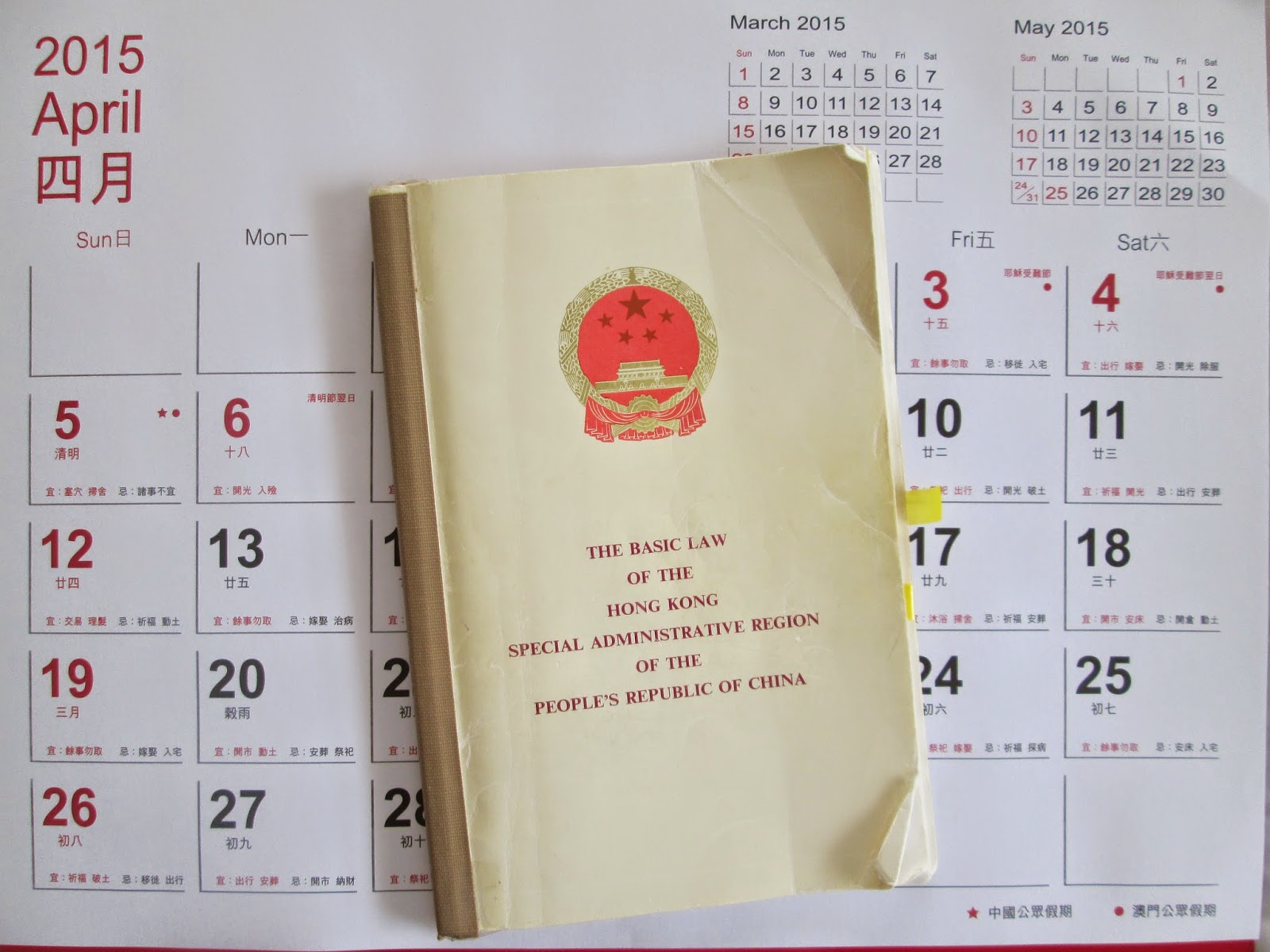 Did the drafters of Hong Kong's Basic Law ever consider civic nomination for the selection of the Chief Executive?  The current Chief Executive, C.Y. Leung, said they did not, in his recent speech to mark the 25th anniversary of the promulgation of the Basic Law. In reply, former member of the Basic Law Drafting Committee, Martin Lee SC, said they did (reported in SCMP).  Former secretary for justice, Ms Elsie Leung, could not recall without reference to the drafting records.  In reply to Mr Lee's comment, the South China Morning Post reported on 6 April 2015 that the Chief Executive had "backtracked".  So what exactly is the position?
A quick search on the University of Hong Kong's Basic Law Drafting History Online website would have uncovered documents that suggest that the Chief Executive is correct insofar as universal suffrage models were proposed; but Martin Lee is correct in that civic nomination was proposed for a model of suffrage based on a body of 600 individuals.  A referendum of the people on universal suffrage was also discussed at one time.
In a Collection of Draft Provisions of the Various Chapters Prepared by the Subgroups of the Drafting Committee, compiled by the Secretariat of the Drafting Committee for the Basic Law in December 1987, one finds reference to four proposals for selecting the Chief Executive (pp 17-18): 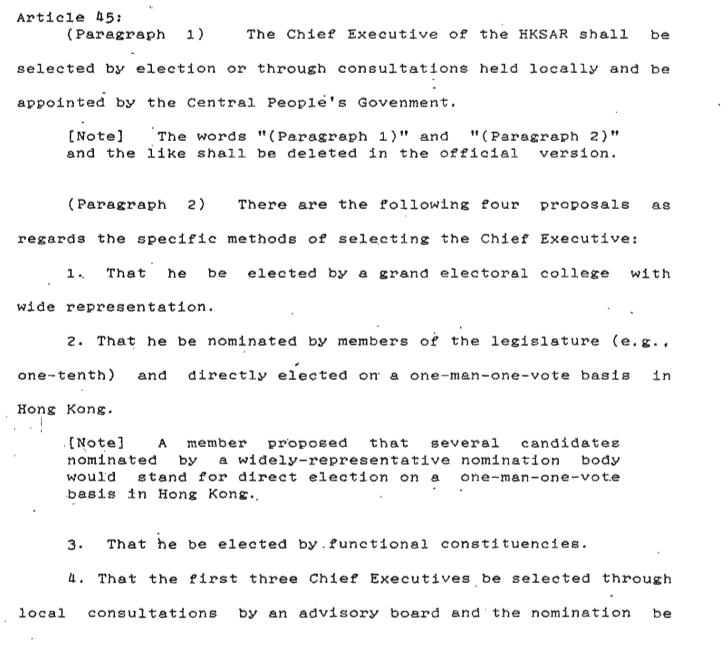 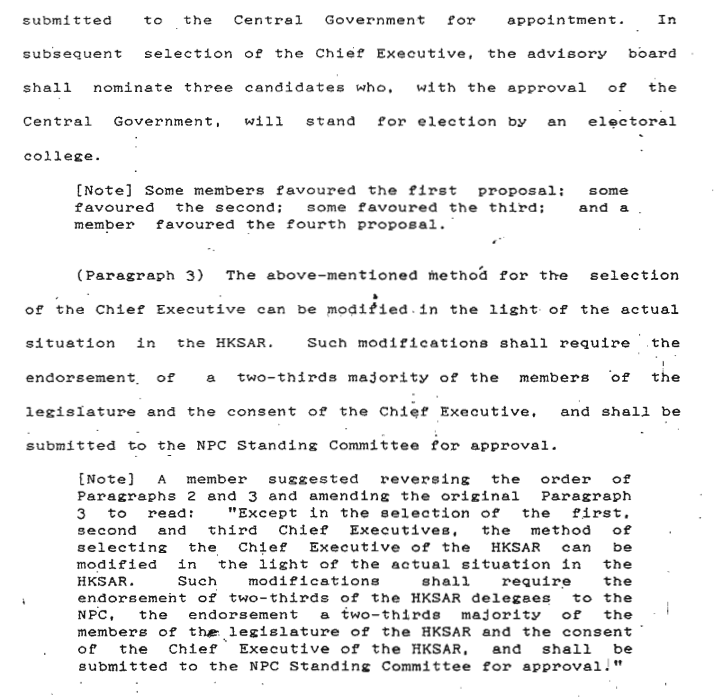 The first proposal ("elected by a grand electoral college") does not refer to a method of nomination but it is unlikely to contemplate civic nomination.  The second proposal refers to nomination by one-tenth of members of the Legislative Council (not a direct form of civic nomination, albeit indirect).  The third proposal ("elected by functional constituencies") also does not refer to a method of nomination.  The fourth proposal refers to nomination by an advisory board.  It is interesting to note that only one member of the subgroup favoured this fourth proposal at the time.
In the first version of the draft Basic Law presented for public consultation in April 1988, one finds reference to five alternatives proposed in the consultation document (pp 13-15): 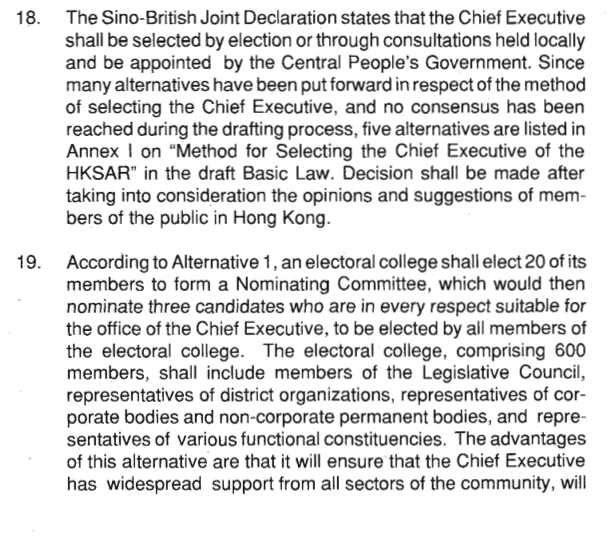 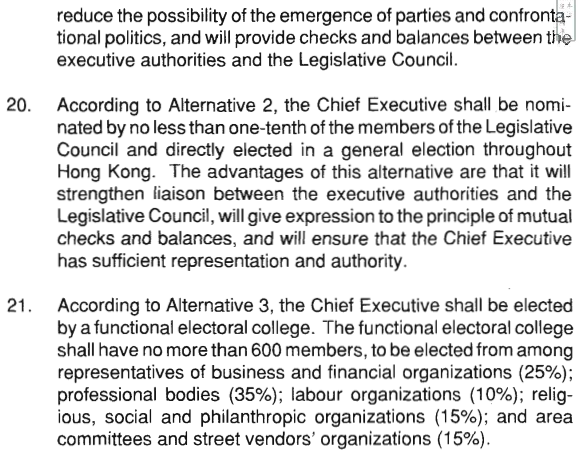 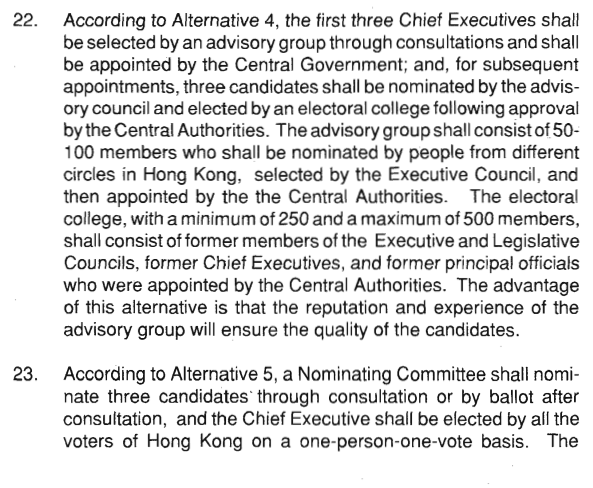 The first alternative refers to a Nominating Committee nominating candidates. The second alternative refers to nomination by "no less than one-tenth of the [directly-elected] members of the Legislative Council". The third alternative ("elected by a functional electoral college") makes no reference to a method of nomination but in the section of the consultation document referring to Annex I, there is reference to civic nomination of Chief Executive candidates for election by a 600 strong member electoral college: 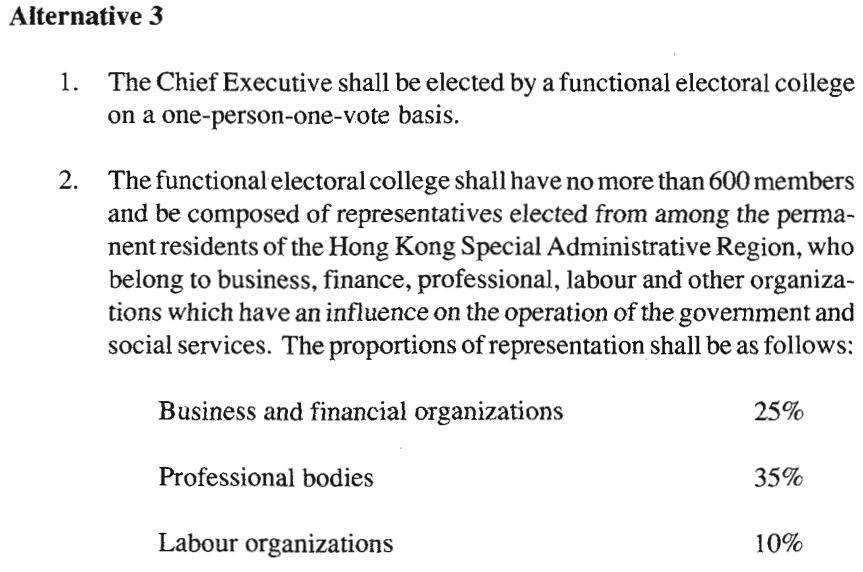 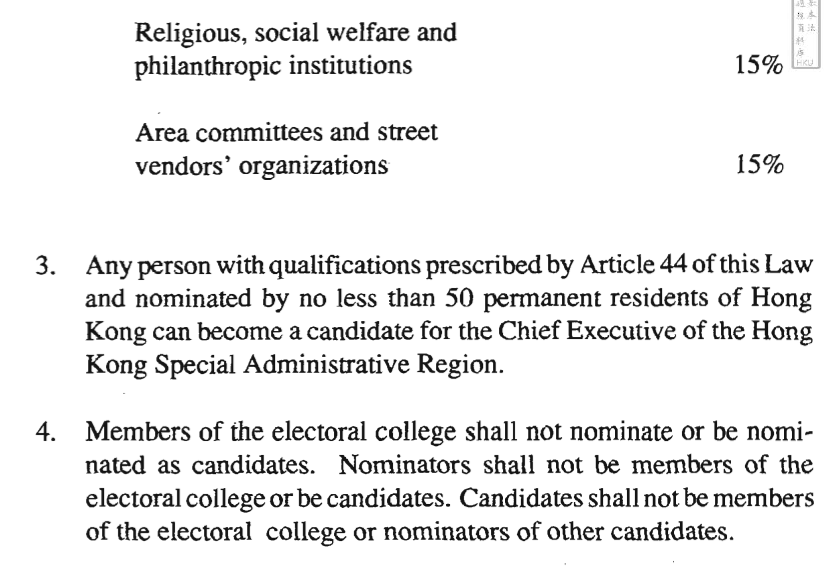 The fourth alternative refers to nomination by an "advisory group". The fifth alternative refers to a Nominating Committee nominating three candidates through consultation or by ballot after consultation.
By the time of the consultation on the second draft Basic Law in February 1989 (months before the events in June 1989), no further proposals were presented and the text of the draft Article 45 reflected the final version; note however the reference to "general election" instead of "universal suffrage" in paragraph two. 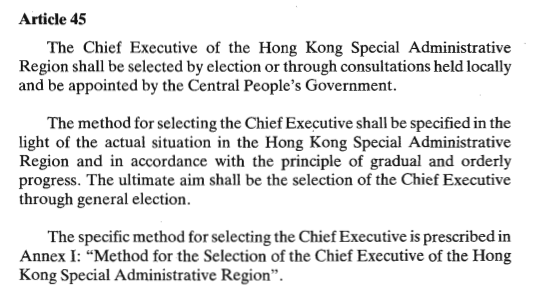 Another interesting piece of history (see below) seen in the February 1989 draft Basic Law was the reference in the draft Annex I to conducting a "referendum in the Region" to decide when the Chief Executive "shall be selected by general election after nominations are made by a broadly representative nominating committee in accordance with democratic procedures".  This clause without the reference to referendum was later moved to Article 45 itself.  It is also interesting to note that had the referendum failed to support universal suffrage, the next referendum was not to be conducted until 10 years later. 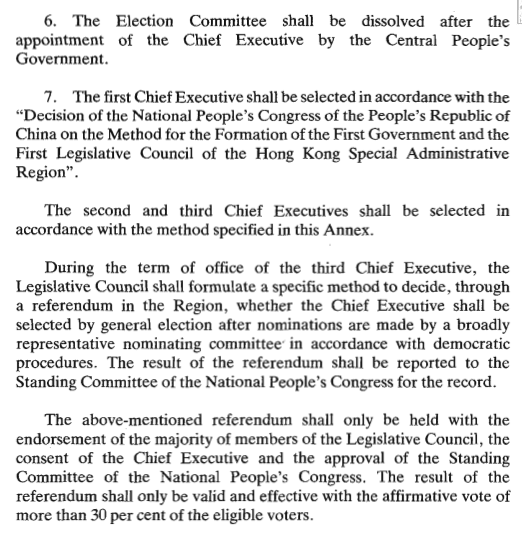 From the analysis of the above documents, it appears that civic nomination was not contemplated in any proposal for universal suffrage of the Chief Executive; however it was proposed in a model of suffrage based on a 600 member electoral college.  The proposals varied widely and do not provide much assistance in the current political reform debate.  However one finds in these drafting materials an interesting statement of legislative intent that is of particular relevance to the current debate.  It is the statement at paragraph 24 of the April 1988 consultation document that identified what was common to the five alternatives then proposed:

Thus one takes from this that any proposal for political reform must "ensure the representation and authority of the Chief Executive" and "give due attention to coordination and checks and balances between the executive authorities and the Legislative Council."  Written by Simon NM Young.  Please note that the original post published earlier today has been amended and reposted once.  Apologies for any misunderstanding that may have been caused.