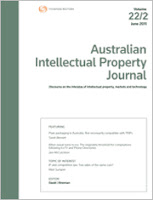 Abstract: A definition of the public domain by Greenleaf and Bond, based on the question “what can users do with works, without obtaining the permission of a copyright owner” and an analysis of it as being comprised by 15 distinct categories of “public rights”, has previously been proposed as necessary and sufficient to describe Australia’s copyright public domain. This article uses this approach to compare Australia’s copyright public domain with that of the very different social and legal system of the People’s Republic of China, and discovered that, compared with Australia, China’s public domain appears rather narrow, at least when only formal legal sources are compared. Out of the eight categories where the two countries differ significantly, Australia’s public domain is stronger in five. The public domain in modern Chinese copyright law is, not unexpectedly, somewhat different from that found in a “western” country such as Australia, but not in the radical way that could be naively expected to stem from arguments concerning China’s traditional philosophy, or its socialist modern history. The harmonising effects of international treaties and the pressures of international trade are the most obvious reasons for the relatively high degree of homogeneity. This comparison also suggests that the definition of the copyright public domain used requires modification in order to include China’s opt-out provisions in relation to free-use exceptions and collective licences. However, the comparison does not suggest that any new public domain categories are needed.