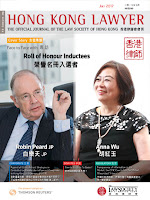 "Transparency of Information in the Market: the CITIC Case before the Market Misconduct Tribunal"
Syren Johnstone & Nigel Davis

Introduction: The Market Misconduct Tribunal recently found that a no material adverse change (“no-MAC”) statement published by CITIC Limited in 2008 did not constitute market misconduct under s. 277 of the Securities and Futures Ordinance (“SFO”) because the statement was unlikely to influence the market price of CITIC securities, and because it was not materially false or misleading.
This came as a surprise to many because at the time of the statement, directors of CITIC were aware of but had not disclosed to the market that it was facing significant mark-to-market losses on foreign currency derivative contracts. When disclosed to the market weeks later, CITIC’s share price plunged, wiping out around HK$20 billion, or two-thirds, of its market capitalisation.  This article identifies some of the more important issues raised by the Tribunal’s findings and the SFC’s decision not to appeal.  Click here to read the full article.