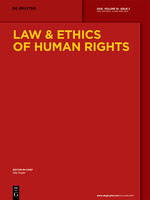 "The Global Language of Human Rights: A Computational Linguistic Analysis"
David Law
Law & Ethics of Human Rights
2018, Vol. 12, Issue 1
Abstract: Human rights discourse has been likened to a global lingua franca, and in more ways than one, the analogy seems apt. Human rights discourse is a language that is used by all yet belongs uniquely to no particular place. It crosses not only the borders between nation-states, but also the divide between national law and international law: it appears in national constitutions and international treaties alike. But is it possible to conceive of human rights as a global language or lingua franca not just in a figurative or metaphorical sense, but in a literal or linguistic sense as a legal dialect defined by distinctive patterns of word choice and usage? Does there exist a global language of human rights that transcends not only national borders, but also the divide between domestic and international law?
Empirical analysis suggests that the answer is yes, but this global language comes in at least two variants or dialects. New techniques for performing automated content analysis enable us to analyze the bulk of all national constitutions over the last two centuries, together with the world’s leading regional and international human rights instruments, for patterns of linguistic similarity and to evaluate how much language, if any, they share in common. Specifically, we employ a technique known as topic modeling that disassembles texts into recurring verbal patterns.
The results highlight the existence of two species or dialects of rights talk — the universalist dialect and the positive-rights dialect — both of which are global in reach and rising in popularity. The universalist dialect is generic in content and draws heavily on the type of language found in international and regional human rights instruments. It appears in particularly large doses in the constitutions of transitional states, developing states, and states that have been heavily exposed to the influence of the international community.
The positive-rights dialect, by contrast, is characterized by its substantive emphasis on positive rights of a social or economic variety, and by its prevalence in lengthier constitutions and constitutions from outside the common law world, especially those of the Spanish-speaking world. Both dialects of rights talk are truly transnational, in the sense that they appear simultaneously in national, regional, and international legal instruments and transcend the distinction between domestic and international law. Their existence attests to the blurring of the boundary between constitutional law and international law.  Click here to download the paper.