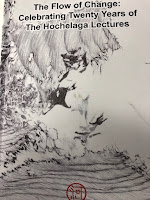 "The Flow of Change: Celebrating Twenty Years of the Hochelaga Lectures"
2018, Faculty of Law, the University of Hong Kong
Editors: Puja Kapai and Hughes Tang

Introduction: The Hochelaga Lectures were established in 1999 in memory of the benefactor's deceased father. Hochelaga was an Iroquois village in what is now Montreal. It was also the name which the deceased used for his company.
The initial intention was for the lecture series to reflect the deceased's commercial background as well as his fondess (albeit as an immigrant) for North American and Quebecois life and history. It was thus hoped to invite prominent jurists to the University of Hong Kong to lecture and deliver seminars on the following matters:-
But the university early on suggested that the series should not be confined to what had been envisaged. Flexibility would allow the university to invite speakers to lecture on topics of pressing concern to the Hong Kong community at any given time.
The series has its motto Heraclitus' maxim (as quoted in Plato's Cratylus) that "everything is in flux and nothing remains the same". By its motto, the series stresses that in any rigorous inquiry nothing can be taken for granted. Mature future development requires that past certainties be constantly re-evaluated (however lonely the task) in light of a rapidly changing present.
To mark the series' 5th anniversary, 2 contemporary artists were commissioned to carve seals bearing the Chinese character "ho" (river). The character was chosen for several reasons. It echoes the opening syllable of "Hochelaga". It alludes to the St. Lawrence River along which Hochelaga (and later Montreal) flourished. Most importantly, it reflects the metaphor of flow in the lecture series' motto.
Table of Content
The Hochelaga Lectures: an Introduction -------------------------------------------------------------------iv

Values in Law: How they Influence and Shape Rules and the Application of Law------------------143
The Honorable Chief Justice James Allsop

Copies of this text are available at the HKU Law Library.