Johannes Chan on Maintaining Institutional Strength: The Court, the Act of State and the Rule of Law (forthcoming book chapter) 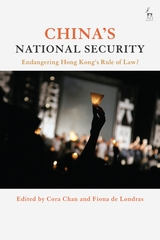 Introduction: With a view to strengthening Hong Kong’s institutional protection against challenges arising from national security, this chapter explored the relatively unexplored concepts of the act of state and fact of state under the Basic Law.  It reviewed the controversial practice of special advocate, and argued that the politically appointed Secretary for Justice should be confined to a political role and an independent Director of Public Prosecution be established.  It proposed ways to strengthen judicial independence and concluded that preserving the core values of Hong Kong is the best way to serve the interests of Mainland China and Hong Kong... Please contact the author (johannes@hku.hk) to obtain the full text.