Weixia Gu on Hybrid Dispute Resolution beyond Belt and Road: Towards a New Design of Chinese Arb-Med(-Arb) and Its Global Implications (Wash ILJ) 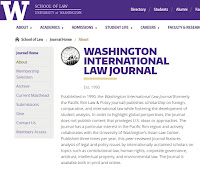 "Hybrid Dispute Resolution beyond Belt and Road: Towards a New Design of Chinese Arb-Med(-Arb) and Its Global Implications”
Gu Weixia

Washington International Law Journal
December Issue, pp. 117-172
Abstract: Arb-med is a form of hybrid dispute resolution that combines an adjudicative approach (arbitration) with a non-adjudicative approach (mediation). Dispute resolution clauses requiring arb-med will assume a popular role in resolving disputes that arise under China’s Belt and Road Initiative. This article argues that China should regulate arb-med in a way to reconcile local practices (mediation) with international expectations (arbitration) in context of the BRI. As an economic bloc proposed by China, the BRI development has the potential to promote dispute resolution means with Chinese characteristics such as arb-med. Global comparative study of leading arbitration jurisdictions in the East and the West shows a heightened awareness of arb-med due process concerns regarding international enforcement of arb-med awards. Most recent reforms on arb-med by leading Chinese arbitration institutions, such as the CIETAC, BAC and SCIA, evidence a trend toward bifurcating the two processes when facing international clients. China is aware of procedural justice in the hybrid dispute resolution. The establishment of the China International Commercial Court (“CICC”), and its creation of the “One-Stop” Platform shows the need to attract foreign parties, in addition to merely Chinese ones, and the pressure to compete in the BRI dispute resolution market. These are the leading factors that drive Chinese regulators to look beyond sociopolitical imperatives and cultural boundaries in promoting arb-med outside of the Belt and Road. As China is anticipated to propel the BRI arbitration system, Chinese arb-med, and its unique process, will remain a fluid area of localized globalism in contrast with globalized localism in China-led BRI dispute resolution development.