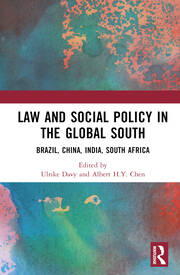 Law and Social Policy in the Global South:
Brazil, China, India, South Africa
Edited by Ulrike Davy & Albert Chen
Routledge
Published in December 2022
280 pp.
Description: The book is an in-depth study of the origins and the trajectories of the law governing social policies in Brazil, China, India, and South Africa, four middle-income countries in the global South with a history in social policy making that starts in the 1920s.
The policies of these countries affect almost half of the world’s population. The book takes the legal framework of the policies as a starting point, but the main interest lies behind the letter of the law: What were the objectives and goals of social policy over the course of the last 100 years? What were the ideas, ideologies, and values pursued by relevant actors? The book comprises four country studies and a comparative study. The country studies concentrate on the political and social context of social policy making in Brazil, China, India, and South Africa as well as on the ideas, ideologies, and values underpinning the constitution, statutory laws, and case law that frame and shape social policy at the national level. The country studies are complemented by a comparative study exploring and describing the commonalities and differences in the ideational approaches to social policies across the four countries, nationally and – in the formative decades – internationally. The comparative study also identifies the characteristics that make Brazilian, Chinese, Indian, and South African social policies distinct from European social policies. With its emphasis on law and drawing on legal scholarship, the book adds a new dimension to the existing accounts on welfare state building, which, so far, are dominated by European narratives and by scholars with a background in sociology, political science, and development studies.
This book is relevant to specialists and peers and will be invaluable to those individuals interested in the fields of comparative and international social security law, human rights law, comparative constitutional law, constitutional history, law and development studies, comparative social policies, global social policies, social work, and welfare state theory.
Posted by Ivy at 3:30 PM