Richard Cullen on Why Japan is Not an Acceptable Military Ally (Pearls and Irritations: John Menadue's Public Policy Journal) 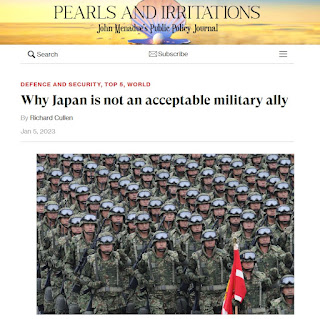 "Why Japan is not an acceptable military ally"
Richard Cullen
Pearls and Irritations: John Menadue's Public Policy Journal
Published in January 2023
Introduction: There is some terrible double-foolishness afoot, that is certain to be widely noticed beyond the Western bubble. Australia is stepping forward with gusto to secure its position as a best-military-buddy not only with America, the most warlike nation in history, according to Jimmy Carter, but also with Japan, one of the 20th century’s most infamous warmongers, presently rearming with alarming relish. You are, as they say, known by the company you keep.
America imposed a Pacificist Constitution on Japan in 1947, after it was defeated in World War II. Article 9 of this constitution outlaws the resort to war by Japan as a means to settle international disputes involving the state.
There were very good reasons to impose this constitution at that time. And there are still very good reasons, explained below, why this constitution should apply today. But it is useful to consider, first, certain views on the Japanese economic miracle that unfolded following the last war.
I visited Mainland China, over a period of years, interviewing Gaokao or final year High School students who were applicants to enter undergraduate study at Hong Kong University. We typically quizzed them in groups using a short debate topic. A popular, open-ended topic asked them to discuss their views on Japan. The loathing of Japan’s pitiless historical rule over much of China starting in the 1930s was sharply evident. But this stood alongside candid, pragmatic respect coupled with a measure of admiration for the economic achievements of Japan and the outstanding, reliable quality of the widest range of Japanese products. Furthermore, while Beijing’s influential China Central Television Service has covered the appalling horrors of the Japanese invasion and occupation of China in great depth it has also noted positive aspects of the industrial revolution imposed on China, by Japan.
Moreover, as China’s open-door policy began to be applied over 40 years ago, after the death of Mao Zedong, Japan played a singular role in the rebuilding of China. Deng Xiaoping first encouraged Panasonic, for example, to come to China during a visit to Japan in 1978. According to a recent report, Panasonic, today, has around 80 subsidiaries in China, employs some 52,000 people and China business (at US$16 billion per year) accounts for about one third of all its business. There are many similar stories.
We need now, however, to look further back in history.
Click here to view the full text.
Posted by Ivy at 3:30 PM