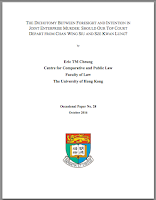 Abstract: Since 21 June 1984, Hong Kong courts have faithfully followed the Privy Council decision in Chan Wing Siu (which was adopted by our Court of Final Appeal in Sze Kwan Lung after the handover) to hold a secondary party liable for joint enterprise murder based on his participation with foresight of a real risk of his co-adverturer inflicting grievous bodily harm on the deceased victim, even if he did not so intend. On 18 February 2016, the UK Supreme Court and Privy Council held in Jogee that the common law took a “wrong turn” in Chan Wing Siu by equating foresight with intent rather than treating foresight as evidence of intent. This landmark decision has prompted our top court to grant leave to appeal on 17 May 2016 in Chan Kam Shing to re-examine the Chan Wing Siu doctrine of extended joint enterprise. While pending the appeal hearing, there is yet another interesting development in that the High Court of Australia decided on 24 August 2016 in Miller not to follow Jogee but affirmed Chan Wing Siu. With the help of volunteer law students, a comprehensive survey of our appellate court decisions (both reported and unreported) before and after Chan Wing Siu on joint criminal enterprise resulting in the victim’s death has been done. This paper traces the relevant history of development of the doctrine of extended criminal joint enterprise in Hong Kong and concludes that our top Court should now depart from Chan Wing Siu and Sze Kwan Lung and reinstate the mens rea requirement of intention instead of foresight for joint enterprise murder.  Click here to download the full paper.