Marking the 20th anniversary of the BSocSc (Govt & Laws) & LLB Programme (GLaws) at HKU, the Hong Kong Journal of Law and Public Affairs (HKJLPA) was launched in 2019 as the annual journal of the Government and Laws Committee (GLC). The theme of the inaugural volume is “Confucian Democracy and Constitutionalism”, which features interesting contributions from experts all over the world exploring the theory and practice of operating Western political institutions such as representative democracy and constitutionalism in the context of Confucian values and norms in East Asian jurisdictions. HKJLPA also features a review of GLC’s initiatives, and the achievements of GLaws students over the past year. 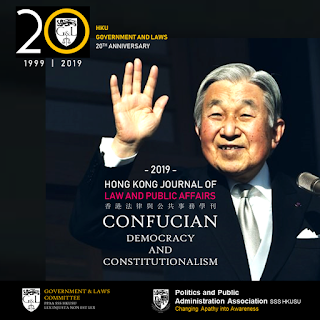 ABOUT THE HKJLPA
The HKJLPA is the first student-edited law and political science journal in all of Asia, established by the Government and Laws Committee, Politics and Public Administration Association SSS HKUSU (GLC) with full support from the Bachelor of Social Sciences (Government and Laws) and Bachelor of Laws Programme at HKU in 2018.
The Journal publishes articles in both English and Traditional Chinese from researchers, teachers, practitioners, and students all over the world. It accepts submissions in all areas broadly related to the intersection between law and politics, including but not limited to comparative constitutional law and politics, international law and relations, jurisprudence and political philosophy, and administrative law and public administration.
As the GLC’s in-house flagship publication, the Journal is committed to promoting a stronger understanding of cutting-edge issues that lie at the nexus of law and politics at the international and domestic levels, and to offering a robust platform for the exploration of ideas that will guide how societies are organised and governed.
ABOUT THE INAUGURAL VOLUME
The theme of the inaugural volume is “Confucian Democracy and Constitutionalism”. For decades, scholars and practitioners have been theorizing and debating possible models for Western political institutions such as representative democracy and constitutionalism to operate in East Asian countries in which the traditional Confucian culture is deeply embedded within. This interdisciplinary study features essays from leading political science, philosophy and legal scholars that engage these theories and debates through investigating multiple East Asian jurisdictions such as China, Vietnam and Korea to further illuminate our understanding on the Region’s political and constitutional future. This inaugural volume also features a review of the GLC's initiatives over the past year, including various forums, visits to legal and political institutions and career events.   The volume can be downloaded here.
The Journal has been produced and edited under the supervision of Dr Eric Ip, and submissions from internationally renowned legal scholars (particularly from the fields of comparative constitutional law and political theory) including Professor Andrew Harding (NUS), Professor Daniel A. Bell (Shandong U), Dr. Jaclyn L. Neo (NUS), Dr. Bui Ngoc Son (CUHK) and Professor Sungmoon Kim (CityU) among others have been accepted.