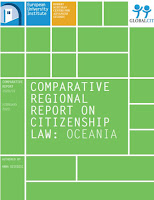 Published in 2020
This report compares the citizenship laws of 12 states in Oceania. It explores the history of citizenship in these countries, modes of acquisition and loss, and current debates and reform plans regarding citizenship policy. It was prepared for the Global Citizenship Observatory at the Robert Schuman Centre for Advanced Studies, European University Institute.
Introduction: The citizenship laws of Oceania reflect the complexities of colonisation, decolonisation, nation building and globalisation. In Oceania’s citizenship laws, we can see the significance of the connections between land and peoples in Indigenous custom and law; trace the movement from self-governing peoples to colonies to independent states; and discover innovative responses to the exigencies of small states in a globalised world. The region of Oceania encompasses the island states and territories situated in the South Pacific Ocean. It includes fourteen member states of the United Nations. This report compares the citizenship laws of twelve of these states: the Federated States of Micronesia (FSM), Fiji, Kiribati, Nauru, the Marshall Islands, Palau, Papua New Guinea (PNG), Samoa, Solomon Islands, Tonga, Tuvalu and Vanuatu. Australia and New Zealand, the two other United Nations member states of Oceania, have their own Country Reports in the GLOBALCIT series.1 This comparative regional report is divided into five parts. Following this Introduction, Part 2 outlines the historical and geographic features of Oceania that have informed the development of its citizenship laws. Part 3 compares the citizenship laws of the twelve states, highlighting general approaches to the acquisition and loss of citizenship, as well as significant differences between states. Part 4 discusses three current trends in the region: the increasing acceptance of dual citizenship, citizenship by investment programs, and the gradual removal of gender discrimination. Part 5 concludes with some reflections on the contribution that the study of Oceania can make to global and comparative debates on citizenship... Click here to download the full report.