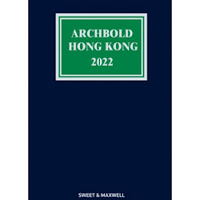 Editor-in-Chief: The Hon Mr Justice Bokhary
General Editor: Professor Simon Young
Sweet & Maxwell
December 2021
Preface by the General Editor
The start of 2021 saw the end of the Ma Court and the inception of the Cheung Court. The Ma Court’s contribution to the development of the criminal law in Hong Kong was significant. Though it heard, on average, fewer substantive appeals than the Li Court, its proportion of criminal law judgments was considerably higher (Li Court: 34 per cent; Ma Court: 42 per cent), with the Chief Justice presiding in almost three quarters of those cases (compared to two thirds during the Li Court).
There is remarkable continuity from the Li to Ma Courts in terms of judgment data in criminal cases. Dissents were rare (less than 5 per cent), one fifth of decisions had a concurring judgment, and the rest were single judgments. Almost one fifth of criminal cases considered a fundamental right or freedom, though one might say all criminal cases engage the fundamental right to liberty. Government appeals were roughly around 15 per cent, and defendants succeeded in more than 55 per cent of cases (Li Court: 58 per cent; Ma Court: 57 per cent).
One difference was the increased number of lead judgments written by the permanent judges of the Court of the Final Appeal (Li Court: 56 per cent; Ma Court: 71 per cent), with a consequential decrease in judgments written by the overseas non-permanent judges (Li Court: 25 per cent; Ma Court: 14 per cent). As the Court matures and its body of case law grows, one would expect this trend to continue. This is not to suggest the overseas judges were any less influential in shaping the jurisprudence, as they continued to sit in 99 per cent of all cases, being absent in only two in the initial period of the Covid-19 pandemic.
This preface does not allow for an in-depth discussion of the 99 criminal law judgments rendered by the Ma Court. Instead, I highlight and commend 12 decisions which, in my opinion, represent a distinct Hong Kong approach to the criminal law. These cases are important as they show how the Court determines the relevant legal position in uncharted territory, often not following the positions adopted in the court(s) below or by other jurisdictions including the United Kingdom. The selected decisions, in chronological order, are HKSAR v Muhammad Riaz Khan (2012) 15 HKCFAR 232 (test for excluding unconstitutionally obtained evidence), HKSAR v Chan Yau Hei (2014) 17 HKCFAR 110 (Internet not a physical place for the offence of outraging public decency), HKSAR v Pang Hung Fai (2014) 17 HKCFAR 778 (clarifying the mens rea of the money laundering offence), HKSAR v Chan Kam Shing (2016) 19 HKCFAR 640 (re-stating the principles of accessory liability including the doctrine of joint criminal enterprise), HKSAR v Liang Yaoqiang (2017) 20 HKCFAR 1 (“do as he did” direction in provocation), HKSAR v Hui Rafael Junior (2017) 20 HKCFAR 264 (elements of conspiracy to commit misconduct in public office), HKSAR v Fong Kwok Shan Christine (2017) 20 HKCFAR 425 (limits of freedom of expression in the precincts of the Legislative Council), Secretary for Justice v Wong Chi Fung (2018) 21 HKCFAR 35 (sentencing of young offenders), HKSAR v Choi Wai Lun (2018) 21 HKCFAR 167 (mens rea for the age element in indecent assault), HKSAR v Wan Thomas (2018) 21 HKCFAR 214 (meaning of “visitors” in the Prison Rules), Secretary for Justice v Cheng Ka Yee (2019) 22 HKCFAR 97 (offence of obtaining access to a computer not applying to the use of one’s own computer), and HKSAR v Yuong Ho Cheung (2020) 23 HKCFAR 311 (Uber services in contravention of road traffic offence).
All indicators thus far suggest a continuity of approach in the Cheung Court.  Handed a hot potato in its first case (HKSAR v Lai Chee Ying (2021) 24 HKCFAR 33), it acquitted itself wisely in the circumstances.  Resonating with the tenor of previous decisions, the Court held that “[a]s far as possible”, the National Security Law is “to be given a meaning and effect compatible with” human rights and freedoms and rule of law values (at [42]). As Chief Justice Geoffrey Ma affirmed in his farewell address, the “importance we place on rights and freedoms is a fundamental feature of the Basic Law” ((2020) 24 HKCFAR 1, 5). In its third and latest judgment (HKSAR v Liang Yaoqiang [2021] HKCFA 26), the Cheung Court showed a merciful side, again similar to the approach seen in previous cases, e.g. HKSAR v Zhou Limei (2020) 23 HKCFAR 169.  In refusing to order a fourth trial, Chief Justice Cheung said the case had “reached a point where enough is enough, and the interests of justice are no longer served  by continuing with the prosecution of the appellant for murder” (at [50]).  This would appear to be another instance of the broader application of what the Lord Chief Justice said in Attorney General’s Reference No 4 of 1989 (1990) 90 Cr App R 366, 371: “That mercy should season justice is a proposition as soundly based in law as it is in literature.”  Now as much as ever this proposition deserves our fullest contemplation.
The production of Archbold Hong Kong each year requires an enormous amount of collective effort. In this regard, I thank the Editor-in-Chief, the Sentencing Editor, our team of contributing editors, the colleagues at Thomson Reuters, and my assistant editors for all their contributions over the past year.
Professor Simon NM Young
Parkside Chambers
September 2021
Posted by Ivy at 9:00 AM