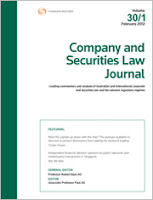 "Confucianism and its Theoretical Application to the Corporate World in China"
Charles Lam and Say Goo
Company and Securities Law Journal
2015, Vol. 33, pp 332-340
Introduction: There has been a long history of socio-economic interactions and trade ties between China and Australia. With China’s economic miracle, it is all the more important to develop the country’s legal system and the underlying philosophy in order to support its high-speed development. In this respect, China can borrow the experience from well-developed common law systems such as that in Australia. In Hong Kong, the Basic Law of the Hong Kong Special Administrative Region provides that judges from other common law jurisdictions may be invited to sit on the Court of Final Appeal to enrich the local court system and the development of its jurisprudence. One remarkable example is the appointment of Sir Anthony Mason, a former Chief Justice of the High Court of Australia, as one of the first non-permanent judges of the Hong Kong Court of Final Appeal.
On the other hand, in doing business with China, it is essential to know about the Chinese way of doing business and the deep-rooted logic and reasoning grounded in Confucianism in order to achieve a win-win commercial partnership. In addition, with an increasing number of Chinese people studying and living in Australia, there is a large pool of talented people who are interested to appreciate the importance between Confucianism and the commercial world. When it comes to ethics, instead of taking an abrupt or revolutionary approach, it is better to develop the system through an orderly and gradual progress according to the culture fit theory as analysed in this note. A stable and sustainable development in China is conducive not only to the interest of Chinese people, but to the sustainability and prosperity of the neighboring countries in this region, including Australia.
This note examines the historical development of Confucianism in China and discusses the insightful teachings of Confucius, Mencius, Xunzi and the Neo-Confucian scholars in the Song Dynasty. Against this historical backdrop, we then discuss the possible revival and application of Confucianism in China in light of the culture fit theory, path dependence theory and institutional theory with a view to restore the corporate world order in China based on Confucianism.  Contact the authors for a copy of the article.