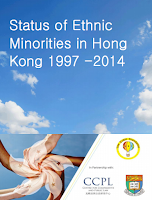 The study, "The Status of Ethnic Minorities in Hong Kong, 1997 to 2014", was commissioned by The Zubin Foundation's Shalini Mahtani and conducted by Puja Kapai, Director at the University of Hong Kong's Centre for Comparative and Public and Law.
"The Status of Ethnic Minorities in Hong Kong, 1997 to 2014" is the first research on ethnic minorities across all areas of life, from crime and health to employment and education, and has been compiled, synthesized and interpreted by author Puja Kapai. What is unique too about this research is that two ethnic minority women, Shalini Mahtani and Puja Kapai, are behind it.
The research presented in this Report is drawn from existing data and research material that is publicly available. In some circumstances, the data pertains to ethnic minority groups more broadly and includes data of groups in addition to those that have been identified as the focus for this Report. In some areas, where limited data disaggregated by ethnicity is available, the data referenced is provided to offer a general impression and should be viewed with this important caveat in mind. It may, in such instances, be unreliable to draw generalised conclusions from the limited data. However, it has been included to highlight that more specific data disaggregated by ethnicity, gender, age and other variables is desirable to facilitate policy development and focused interventions. These are data gaps identified through this report. The government and other researchers are encouraged to identify additional data gaps and supplement with research of their own.
The Report was launched on 23 September 2015 at an event held at the Foreign Correspondents' Club.  The launch was widely reported in local media, including RTHK, South China Morning Post and DBC.  RTHK featured a video clip and reported the following:

The government is failing to fulfill its constitutional obligation to ensure that people are free from discrimination, according to the author of a new study by the University of Hong Kong which concludes that ethnic minorities here are “extremely marginalised.”
The study, by the University’s Centre for Comparative and Public Law, showed that ethnic minority residents consistently under perform in key areas such as income and education compared to the rest of the population.
In a comprehensive compilation of data from the government, non-governmental organisations and academic research, the Centre found that minorities are less likely to attend kindergarten or stay in school, while they’re more likely to hold low-paying, low-skilled jobs, and earn below-average wages.
The Centre’s director, Puja Kapai, told RTHK’s Timmy Sung that the report “is supposed to be a major eye-opener to the government… If everything is equal; if there is fairness in Hong Kong’s system; if you’re serious about your diversity pledge; then why do we have this consistent under performance across all areas of life for ethnic minorities?”
Kapai said the government is obligated under the Basic Law to guarantee equal rights for all, and urged the administration to set up a high-level committee to look into the major problems faced by minorities: education; discrimination; poverty; and health.
She added that the marginalisation of minorities “may not necessarily be based on racial discrimination. It may be that the way in which the system is designed is not capable to allow equal access. But that is indirect discrimination anyway.”

DBC noted the following key observations from the event:

The report can be read and downloaded here.  Click here for the HKU Press Release.  Ms Kapai's panel interview on RTHK radio's Backchat programme can be found here.
Posted by Simon NM Young at 7:21 AM