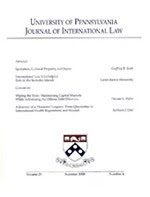 "Privacy, Predictability and Internet Surveillance in the U.S. and China: Better the Devil You Know?"
James D. Fry

University of Pennsylvania Journal of International Law
Vol. 37, Issue 2, 2015, pp 419-501
Introduction (excerpt): The People’s Republic of China (“PRC”) has received considerable criticism from the United States for the human rights issues raised by its Internet surveillance program. For example, according to a 2012 Congressional Research Service (“CRS”) Report for Congress, Freedom House ranked the People’s Republic of China as “one of the five countries with the lowest levels of Internet and ‘new media’ freedom.” Some Western commentators echo this same type of criticism of the PRC’s Internet surveillance program. At first glance, such criticism seems overwhelmingly justified, if not for any other reason that approximately seventy PRC citizens have been incarcerated for writing about politically sensitive topics online in the past few years, which has raised serious concerns over the freedom of speech there. It is difficult to assess the validity of this criticism of the PRC’s Internet surveillance laws and policies without clearly designating a referent. Using U.S. Internet surveillance laws and policies as the referent, PRC Internet surveillance laws and policies arguably can be seen as more in line with international human rights norms, especially with regard to predictability, although that might be changing on account of the recent Snowden revelations. While the Snowden revelations undoubtedly have had catastrophic effects on national security, they potentially have helped improve the human rights situation in the United States by disabusing U.S. citizens of the notion that the U.S. Constitution actually protects them from unreasonable Internet searches and seizures by the government.
In presenting and defending this argument, this article is divided into five parts, including this brief introduction and an equally brief conclusion in Parts 1 and 5, respectively. Part 2 sets out the obligations under international law concerning Internet surveillance, which is helpful in assessing the U.S. and PRC approaches to Internet surveillance. Part 3 explores the U.S. laws governing Internet surveillance — especially the Foreign Intelligence Surveillance Act (“FISA”) and the USA Patriot Act. Part 4 analyzes the PRC laws governing Internet surveillance. While there are numerous articles that analyze the PRC approach to Internet surveillance, it would appear that none of them provide the actual language of the PRC laws that directly relate to Internet surveillance, let alone analyze the actual PRC laws, as this article does. Moreover, this article appears to be the first to mention the predictability issues associated with Internet surveillance laws. These two features of this article in and of themselves make this a valuable contribution to the literature, with the other features — including the comparative elements of this analysis — only adding to this article’s overwhelming value. Again, this article’s thesis is that the PRC’s Internet surveillance laws, while not ideal, are better than the U.S. laws with regard to predictability inasmuch as there is no reasonable expectation of privacy in the PRC. Admittedly, the United States might be catching up in the sense that U.S. citizens might not have a reasonable expectation of privacy anymore after the Snowden revelations, notwithstanding the Fourth Amendment. To be clear, this certainly is not something to be proud of in either jurisdiction... Click here to download the full article.