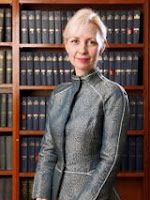 Congratulations to Amanda Whitfort on winning the University of Hong Kong Knowledge Exchange Excellence Award 2016.  The award was for Amanda's work on the "Review of Animal Welfare Legislation in Hong Kong".  This university-wide award was introduced in 2015-16 and has only been awarded twice.  The award recognises research that has made a significant impact in society.  The summary of the impact of her work which began in 2008 when she was awarded a Public Policy Research grant by the Research Grants Council to conduct her study of animal protection legislation is as follows:

This research provided the first and, to date, only empirical study of the adequacy of animal protection legislation in Hong Kong. The study generated widespread public discussion and impetus for law reform and was used by the Agricultural Fisheries and Conservation Department (AFCD) to introduce new legislation controlling the breeding and sale of companion animals in Hong Kong with the enactment of the Public Health (Animals and Birds) (Animal Traders) Regulations 2016. The study also resulted in significant policy change in stray-animal management and introduction of specialised training for police and prosecutors in presenting animal cruelty cases at court.

The Award will be presented at the University's annual award presentation ceremony to be held in March 2017.

Amanda was recently profiled in the October 2017 edition of the HKU Knowledge Exchange Newsletter, pp 1-2.