Abstract: Ecological degradation and strategies to combat it have loomed increasingly large on the socio-legal research agenda for the past three decades or so. The scholarly attention they have garnered has spawned a rich literature on multi-level environmental governance, including on an international, and even global, scale. Social scientists have spearheaded the quest for gaining a deeper insight into the phenomenon, but students of law have also been active participants in the process of knowledge accumulation. Asian inputs have been relatively modest and have been produced comparatively late in the long journey of scientific, or quasi-scientific, discovery, yet they enhance the understanding of the issues broadly addressed, even if at times in a critical fashion, despite their selective focus and the paucity of constructively articulated suggestions for remedial action. 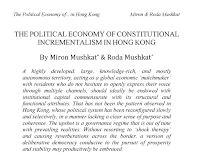 "The Political Economy of Constitutional Incrementalism in Hong Kong"
Roda Mushkat & Miron Mushkat
Northwestern Interdisciplinary Law Review
2016, vol. 9, pp. 1-46
Abstract: A highly developed, large, knowledge-rich, and mostly autonomous territory, acting as a global economic ‘matchmaker’ with residents who do not hesitate to openly express their voice through multiple channels, should ideally be endowed with institutional capital commensurate with its structural and functional attributes. That has not been the pattern observed in Hong Kong, whose political system has been reconfigured slowly and selectively, in a manner lacking a clear sense of purpose and coherence. The upshot is a governance regime that is out of tune with prevailing realities. Without resorting to ‘shock therapy’ and causing reverberations across the border, a version of deliberative democracy conducive to the pursuit of prosperity and stability may productively be embraced.