As start-ups and small businesses continue to crowdfund through the Internet, governments and regulators have had to respond.  The United States created a tailored regime for crowdfunding.  The United Kingdom and Singapore publicly consulted and clarified their regulatory approaches.  The Hong Kong regulator has been less proactive, thus inviting criticisms that Hong Kong has fallen behind in enabling financial innovation and entrepreneurship.
Are these criticisms fair and accurate?  Not necessarily so.  In my latest research paper, I ventured to show that gateways for crowdfunding already exist in Hong Kong.  If these exemptions were fully utilised, Hong Kong would be broadly on a par with, or even ahead of, other international financial centres in allowing entrepreneurs to tap capital from professional (accredited) investors - the investor pool most coveted by entrepreneurs.
With a strong political will to create jobs and promote growth after the global financial crisis, the United States was the most ardent in enacting legislation to enable crowdfunding.  The Jumpstart Our Business Startups Act ('Jobs Act') was passed in 2012 against this background...
The HKCFA's clarification of the application of s.103(3)(k) has potentially far-reaching implications.  There are 200,000 high net worth individuals in Hong Kong holding US$1.1 trillion in wealth.  Start-ups will likely prefer a smaller number of keen professional investors to a large number of random retail investors.  It has been reported that angel investors tend to stay away from companies that have crowdfunded from retail - a company with too many investors is difficult to manage.   The HKCFA decision will make it easier for issuers to locate and connect with these business angels.  There is speculation that the authorities may consider legislating to reverse the HKCFA decision.  That would be regrettable.  As Fok PJ succinctly explained in his judgment in the Pacific Sun case, "if the investment products are not in fact sold or intended to be sold to the general public and instead are sold or intended to be sold only to professional investors, there is no necessity for protection to be afforded to the general public since they are not exposed to any material risk."  ... 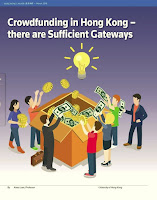 The HK$5 million small-scale offer exemption is slightly lower than the US$1.07 million small-scale offering exemption in the United States.  The Hong Kong regime however comes with a lighter touch.  There is effectively no particular disclosure requirement (subject however to provisions in the SFO governing false or misleading statements).  One should not underestimate the potential of this exemption for small or initial capital-raising, such as seed funding.  Note however that the exemption is available to companies only.  This exemption is not available to projects that are structured in the form of a non corporate CIS or a structured project.
As demonstrated, Hong Kong is not falling behind in the gateways there are available for securities crowdfunding.    Yet, because the prohibitions and exemptions in the securities offering regime are fraught with difficulties, and the penalties for contravention severe, market players have been hesitant in making full use of the exemptions.
We have heard endless debates on why and how the Hong Kong regulatory rules should kick-start their projects by making purposeful use of existing exemptions.  As the market starts to mature, regulators will have a fuller sense of how best to facilitate and regulate the crowdfunding space.  In the meanwhile, there is sufficient room for going forward. Click here to read the full text.