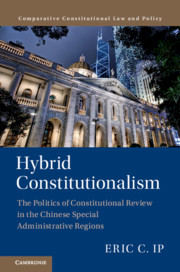 Description: This is the first book that focuses on the entrenched, fundamental divergence between the Hong Kong Court of Final Appeal and Macau's Tribunal de Última Instância over their constitutional jurisprudence, with the former repeatedly invalidating unconstitutional legislation with finality and the latter having never challenged the constitutionality of legislation at all. This divergence is all the more remarkable when considered in the light of the fact that the two Regions, commonly subject to oversight by China's authoritarian Party-state, possess constitutional frameworks that are nearly identical; feature similar hybrid regimes; and share a lot in history, ethnicity, culture, and language. Informed by political science and economics, this book breaks new ground by locating the cause of this anomaly, studied within the universe of authoritarian constitutionalism, not in the common law-civil law differences between these two former European dependencies, but the disparate levels of political transaction costs therein.