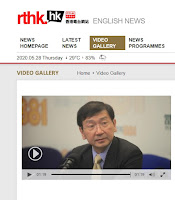 'Naive to think new law will target a small group'

Professor Johannes Chan
RTHK English News
28 May 2020
Legal scholar Johannes Chan said on Thursday that it is naive to think the national security law that Beijing is planning to impose in Hong Kong will affect only a small group of people, saying what constitutes 'national security' has never been defined.
“In China they never really define what exactly is 'national security'. So the law could change according to political expediency or political necessity,” he said.
"We don't know if it will be more clearly defined in the coming law but in accordance with their tradition and the current scope, it could be exceedingly wide," Chan said, adding it is naive to think the law will only apply to only a small group of people.
The legal scholar also said he doubts if the central government will accept unfavourable rulings by Hong Kong courts linked to the new security law.
“If some of the law's scope is too wide and the Hong Kong courts said it is in violation of the Basic Law, human rights protection, or the Bill of Rights and strike it down, and if that happens what will the central government do? Will they just clap their hands and say ‘well done’ or are they going to interfere?” he asked.
Chan said the plan to impose national security legislation will put Hong Kong's courts in a difficult position.
He said he fears the scope of jurisdiction will be substantially limited by the laws to be drafted by the National People's Congress Standing Committee, as it has the ultimate power to interpret them.