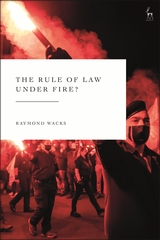 The Rule of Law Under Fire?
Raymond Wacks ( Emeritus Professor of Law and Legal Theory at the University of Hong Kong)
Hart Publishing
Published on 21 October 2021
Summary: Does the rise of populism, authoritarianism, and nationalism threaten the welfare of the rule of law? Is this fundamental democratic ideal under siege?
In this timely and important book, Raymond Wacks examines the philosophical roots of the rule of law and its modern, often contentious, interpretation. He then investigates 16 potential ideological, economic, legal, and institutional dangers to the rule of law. They range from the exercise of judicial and administrative discretion and parliamentary sovereignty, to the growth of globalisation, the 'war on terror', and the disquieting power of Big Tech. He also considers the enactment and enforcement in several countries of Draconian measures to curtail the spread of COVID-19, which has generated fears that these emergency powers may outlive the pandemic and become a permanent feature of the legal landscape, thereby impairing the rule of law.
Wacks identifies which issues among this extensive array pose genuine risks to the rule of law, and suggests how they might be confronted to ensure its defence and preservation.
Reviews:

“It is a welcome reminder of both the value of the rule of law and its fragility in the face of grave challenges … We travel in competent hands from the ancient philosophical foundations of the rule of law to an appraisal of the primary questions arising about its health in the modern world. This highly readable text will appeal not only to lawyers and legal theorists but to many others who wish to reflect on these important issues.” – TRS Allan, Professor of Jurisprudence and Public Law, University of Cambridge, UK
“The rule of law has come under strain from multiple directions, as skilfully charted by Raymond Wacks, who provides interesting and informed insights as to the nature of such tensions and their interaction.” – Paul Craig, Emeritus Professor of English Law, University of Oxford, UK
“One of our most impressive legal theorists, Raymond Wacks has written a wonderful small book that successfully illuminates a large number of pressing legal and political questions ... A wonderful synthesis of legal theory with real-world political and social analysis that I strongly recommend to anyone with an interest in the rule of law and its uncertain fate.” – William E Scheuerman, James H Rudy Professor of Political Science, Indiana University, USA
“With seasoned pen and lucid prose, Raymond Wacks continues his lifelong journey of grappling with new and old challenges to the rule of law. The result is something rare in legal scholarship – accessible erudition.” – Albie Sachs, former Justice of the Constitutional Court of South Africa
“Raymond Wacks is rightly concerned that integrity, democracy and legality are under siege in our world. By reference to key concepts that help him to illustrate his proposition, he helps to explain how the rule of law is not the same concept as the law of rules. It must have a foundation resting on deep values … Raymond Wacks carefully and accurately defines the concept for today's world … And he affords us a roadmap by which we can invigorate, defend and strengthen this key concept of human freedom.” – The Hon Michael Kirby AC CMG, former Justice of the High Court of Australia
“Raymond Wacks' short and readable book does a lot more than offer a spirited defence of the rule of law at a time when it is 'under fire'. He articulates simply and clearly his own theory of the rule of law in a discussion of the complex philosophical debates about it, and then vindicates that theory through showing its application to topics as different as 'capitalism', 'emergencies' and 'globalization'. An astonishing achievement!” – David Dyzenhaus, University Professor of Law and Philosophy, University of Toronto, Canada
“Wacks shows [that] the Rule of Law embrac[es] notions of justice ... [and] is indispensable to a society that claims to be democratic ... The book is a timely reminder of the threats we face on many fronts and of the need for vigilance in defence of the Rule of Law.” – John Dugard, Professor of Law Emeritus, University of the Witwatersrand, South Africa and Leiden University, the Netherlands