A report released this week by local NGO ADM Capital Foundation, co-authored by Assoc Prof Amanda Whitfort focuses on the exotic pet trade in Hong Kong. The report highlights the lack of transparency in the trade, the need for updated regulations to better control smuggling of live endangered species for rare animal collectors, the unsuitability of many exotic species to be kept as pets and the negative effects on conservation and animal welfare when exotic pets are intentionally or accidentally released into local ecosystems.
“Hong Kong's lack of a positive list of acceptable exotic pets and failure to look behind imports of large numbers of animals from suspicious source countries, which should set off alarms for law enforcement agencies, encourages the importation of smuggled animals for the pet trade and is sending species that are at serious risk of extinction more quickly towards that fate” said Whitfort. “Our current policies and laws undermine the objectives of the UN Convention on Biological Diversity” she added.
Whitfort called on government to
The press report had input from the SPCA (Hong Kong), the Kadoorie Farm and Botanical Garden, WWF (HK), local academics working on wild animal trade and private vets working with exotic pets. 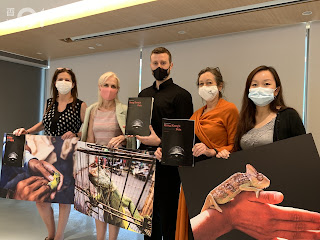 Amanda Whitfort and ADM Capital Foundation Team and Dr Woodhouse from the SPCA (HK)
Posted by Ivy at 7:13 AM