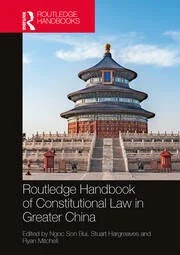 "Rights Movement, Civil Disobedience and Civil Unrest"
Han Zhu
in Routledge Handbook of Constitutional Law in Greater China, ed. by Ngoc Son Bui, Stuart Hargreaves, and Ryan Mitchell (Routledge, Dec 29 2022), Chapter 13, pp. 204-220
Abstract: This chapter aims to explore how the differences in constitutional systems have shaped social movements in the three regions by applying the mainstream social movement theory—the political opportunity and process theory—to the field of constitutional law. According to the political opportunity theory, the structure of political opportunities embedded in a society may have a significant impact on a social movement's development by inspiring or discouraging movement mobilization. Social movements in post-1989 China are characterised by Rights movements, which refer to a wide variety of actions by citizens to defend their civil or political rights through legal activism or other mobilisation tactics. The changing structure of legal opportunities inspired the emergence of weiquan movements, along with various resistance movements, in the mid-1990s. Weiquan activism was initiated by common citizens in both urban and rural areas.
Posted by Ivy at 4:30 PM