Marcelo Thompson: CERRE Report on Digital Sovereignty and the Normativity of Data Governance with Recommendations (KE)

The “Global Governance for the Digital Ecosystems” Report was released at the Paris Peace Forum on November 11, 2022, and presented by the project’s co-leads — the Forum’s President, Pascal Lamy (former Director General of the WTO and Board Member at CERRE), and Bruno Liebhaberg (CERRE’s Director General) — to Emmanuel Macron, the President of France.
Dr Marcelo Thompson co-authored the Report’s recommendations on
Data Governance and authored the paper on Digital Sovereignty —
titled: “Digital Sovereignty and the Normativity of Data Governance”. 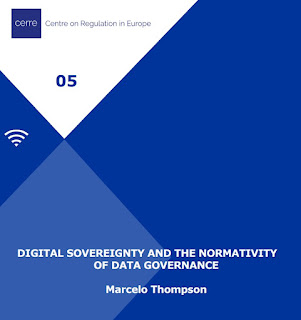 In the paper, Marcelo identifies the various ways in which extra-legal (political, moral, cultural) considerations pervade data governance debates and challenge the prospects of harmonisation initiatives. The report points nevertheless to the inevitable and often legitimate role played by such considerations and makes concrete recommendations for navigating these.
Introduction: Harmonisation approaches to data governance suggested in earlier papers of this workstream resonate with recent proposals in the scholarly literature advocating for a global data privacy agreement - either as an agreement anchored in the WTO system, or as an expression of a new Digital Bretton Woods agreement.  These proposals respond to difficulties in reconciling differences between global data privacy regimes, as well as between the more substantive regimes among them, and the principles that inform the international trade system.  They speak of ideals of universality that the networks of technology and trade are taken to reflect, given the equalising potential of such networks, as enablers of "development of human capital" and "democratisation of opportunity throughout the world".  As Plato gestured in "The School of Athens", these proposals point up.
The whole report can be accessed at: https://cerre.eu/wpcontent/uploads/2022/11/GGDE_FulIReport.pdf
Posted by Ivy at 3:30 PM