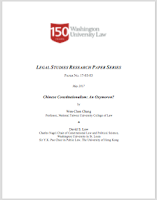 (1) the use of quasi-constitutional statutes that shape the powers of the administration and the courts;
(2) the articulation and enforcement of constitutional norms by political means, such as popular movements;
(3) the role of transnational law in supplementing constitutional law; and
(4) the phenomenon of dissonant constitutionalism, wherein a constitution is blatantly violated yet at the same time commands too much normative authority to be simply ignored. In such situations, the constitution may function as a constructive irritant: in the best-case scenario, the unresolved contradiction generates genuine constitutional discourse that in turn fuels the development of the constitutional order.