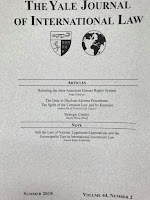 Summer 2019, Vol 44, Number 2
Abstract: For decades, the extent to which US courts should enforce antitrust laws against state-led export cartels has been a subject of intense debate among academics, courts, and policymakers. As defendants in such cases often invoke comity-related defenses, the outcomes of these cases have turned on fact-specific inquiries into the reach and meaning of foreign laws, as well as foreign sovereign involvement in the cartels. However, judicial focus on facts alone tends to obscure the fundamental question of whether granting the comity-based defense to the foreign exporters would maximize the interests of the United States. The US government’s contrasting stance in the recent vitamin C case and as regards Japanese export cartels in the 1980s perfectly illustrates the changing nature of American interests in such cases. Thus, an optimal response to state-led export cartels not only turns on factual inquiries of the existence of state compulsion, but also its impact on trade policy and domestic politics in both the exporting and importing countries. Comity analysis therefore needs to be robust enough to accommodate and adapt to the particular economic and political circumstances. As the executive branch is in the best position to balance and reconcile competing interests of foreign relations, US courts should accord a high level of deference to the executive in cases involving state-led export cartels... Click here to access the paper on SSRN.