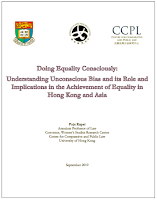 Description: In a project funded by the Equal Opportunities Commission, Puja Kapai conducted a study into the levels of unconscious bias on the grounds of gender and race in Hong Kong.  She examined who harboured which types of unconscious biases, whether such biases serve as predictors of discriminatory behaviour and whether it is possible to ameliorate these unconscious biases.  Summary of the results in conclusion: The results of this research study provide groundbreaking insights into the prevalence, nature and extent of unconscious bias among different social groups as well as the variables which influence such biases negatively or positively in the context of Hong Kong. Furthermore, the study demonstrates the effectiveness of specifically designed interventions in terms of reducing particular biases, while outlining the more challenging categories of unconscious bias which require more complex intervention models to address concretely. The key research findings of the 180-page report are:

(2) Unconscious bias tends to be stronger in the case of racial biases compared with gender biases.

(3) The level of racial bias also varies depending on target group with South Asians being more susceptible to higher levels of bias relative to Mainland Chinese for the most part.

(4) The level of gender bias in relation to sciences is significantly higher when compared to gender-role stereotypes pertaining to career.

(5) The IAT itself has the effect of mitigating against certain types of unconscious bias but may have the opposite effect in respect of deeply entrenched biases.

(6) Interventions can and do work. However, the effectiveness of interventions varies depending on the type of bias, targets of discrimination, social groups targeted by the intervention, their social networks and exposure to outgroups.

(7) Some biases (racial biases) are more entrenched than others (gender-based biases) in the Hong Kong context and interventions have limited or little impact in reducing them.

(8) One-size-fits-all solutions do not work. There is a clear and potent need for intervention tools to be well-tailored to different groups and contexts and fine-tuned for different types and manifestations of biases.

Importantly, this study is the first of its kind to examine the manifestation of unconscious bias as embedded in an Asian context. The findings demonstrate that unconscious bias clearly exists and is prevalent in our society. However, in Hong Kong, it presents in specific ways judging from the distinct findings pertaining to certain racial categories and gender stereotypes in relation to career and sciences. Moreover, it reveals the significance of social context, networks and the particular background factors on bias levels. While intervention by way of raising awareness about the existence of different types of unconscious bias is found to mitigate biases, it is not sufficient in and of itself to reduce these in concrete terms or in the longer-term. Furthermore, if delivered carelessly without due consideration of the environmental context in which 109 participants are engaged and their background or networks, or a failure to debrief participants properly in terms of what the scores mean relative to prejudice levels, the intervention can have a detrimental effect, in turn, exacerbating biases.
These findings bear important implications for future of research and design considerations pertaining to unconscious bias and the implementation of interventions in Hong Kong in across different sectors, most notably, corporate, high school and higher education sectors.