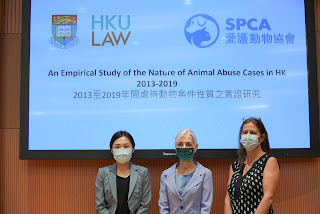 On Friday 3 September, the Law Faculty's Associate Professor Amanda Whitfort and Dr Fiona Woodhouse Deputy Director (Welfare) of the Society for the Prevention of Cruelty to Animals (Hong Kong) published an empirical study of animal cruelty cases in Hong Kong. The study was funded by the Policy Innovation and Co-ordination Office of the HKSAR government. It examined 335 cruelty cases in the SPCA's police investigation database from 2013 to 2019 and identified patterns of offending, including which types of animals are most at risk and in what circumstances.

Dogs were the primary victims in all categories of animal abuse. In 75% of prosecutions for active maltreatment or neglect-related cruelty the offender was male. In most cases the offender was the dog's owner or a family member of its owner. The majority of neglect cases involved mongrel dogs being abandoned inside private premises without food/water. In nearly all cases of abandonment, the animals were found alone inside rented village houses (with their owners not living on site) and, in nearly one third of cases, the animals died. In many cases the dogs found were significant in number and had been collected from strays by persons who did not have sufficient financial resources or time to care for them adequately. The study found action is necessary to educate owners to voluntarily surrender animals they can no longer care for appropriately rather than place their welfare at high risk by abandoning them. Government policies prohibiting the keeping of dogs in public housing, alongside historical dog population management strategies, have both contributed to the serious problem of abandonment of dogs in Hong Kong. 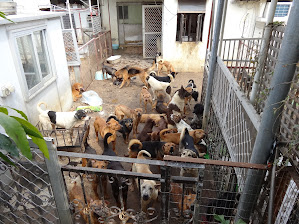 In two significant animal hoarding cases, where the dogs had started to eat each other to survive, more than 100 animals had been collected by the offenders and placed in so-called 'rescue' shelters. The shelters were accepting animals from members of the public in exchange for donations. To counter the risk to animals in unregulated shelters, there is an urgent need to introduce shelter licensing legislation. A further reason to regulate animal rescue shelters is the lack of financial transparency as to how public donations are being used.
Other findings of the study include the need for:
A full report of the study can be read on the Faculty staff webpage for Associate Professor Whitfort at https://www.law.hku.hk/academic_staff/amanda-whitfort/
Posted by HKU Law at 6:48 AM