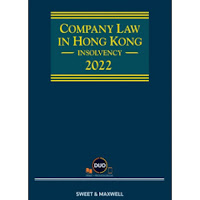 Company Law in Hong Kong – Insolvency 2022
General Editor: Dr Stefan H C Lo
Sweet and Maxwel1
January 2022
750 pp.
Preface by the General Editor
Company Law in Hong Kong – Insolvency covers major aspects of corporate insolvency law in Hong Kong. As mentioned in the Preface to the 2021 edition of this work, reform in this area of law in Hong Kong has been ongoing in recent years. Following changes made by the Companies (Winding Up and Miscellaneous Provisions) (Amendment) Ordinance 2016 (14 of 2016) to the Companies (Winding Up and Miscellaneous Provisions) Ordinance (Cap.32) (“CWUO”) in the “Improvement of Corporate Insolvency Law” reform exercise, the Government has been working on a bill for the new statutory corporate rescue procedure referred to as provisional supervision, together with new insolvent trading provisions. In late 2020, the Government had announced that the Companies (Corporate Rescue) Bill will be tabled in the Legislative Council in the first quarter of 2021. Alas, expectations were dashed and the Bill has still not been finalised. Aspects of the proposals on provisional supervision expected to be in the Bill are outlined in Chapter 13. It is to be hoped that the Government re-focuses priority on the Bill for introduction in the Legislative Council in 2022.
There have continued to be a large number of cases handed down in the past year in Hong Kong on winding up law. Three specific areas are mentioned here. Firstly, the courts in recent times have developed and refined the principles on the duty of directors to take into account creditors’ interests when a company is insolvent or likely to be insolvent. Wing Hong Construction Ltd v Hui Chi Yung [2020] HKCFI 2985 is another case dealing with this duty. The case is particularly useful in discussing the test of insolvency in this context (see Chapter 1). Secondly, a number of cases in recent years have grappled with the intricacies of CWUO s.182, which voids dispositions of a company’s property following commencement of winding up (unless the disposition is validated by the court). The winding up of Hsin Chong Construction Co Ltd has spawned a number of such cases, including the Court of Final Appeal decision in Hsin Chong Construction Co Ltd (in liq) v Build King Construction Co Ltd [2021] 4 HKC 590 (nature of a disposition) and the Court of First Instance case of Re Hsin Chong Construction Co Ltd (No.3) [2021] 1 HKLRD 582 (whether mandatory MPF contributions are to be validated by the court): see Chapter 9. Thirdly, there has also continued to be new cases on cross-border insolvency, as discussed in both Chapters 4 and 12, dealing with winding up of foreign companies (Re China Huiyuan Juice Group Ltd [2021] 1 HKLRD 255) and recognition and assistance to foreign insolvency office-holders under the common law (Re FDG Electric Vehicles Ltd [2020] 5 HKLRD 701; Re Moody Technology Holdings Ltd [2020] 2 HKLRD 187; Re China Bozza Development Holdings Ltd [2021] 4 HKC 560). The past year also saw the entering into of a pilot scheme between the Supreme People’s Court (“SPC”) and the Hong Kong Government to facilitate mutual recognition of insolvency office-holders between Intermediate People’s Courts in certain designated pilot areas on the Mainland and the High Court in Hong Kong: see Chapter 12 and the Record of Meeting of the Supreme People’s Court and the Government of the Hong Kong Special Administrative Region on Mutual Recognition of and Assistance to Bankruptcy (Insolvency) Proceedings between the Courts of the Mainland and of the Hong Kong Special Administrative Region (14 May 2021). The scheme is the product of some years of negotiation between the SPC and Hong Kong’s Department of Justice. From the Hong Kong perspective, it is hoped that the scheme can assist in overcoming some of the difficulties which have faced Hong Kong liquidators in recovering Mainland assets of companies being wound up in Hong Kong.
Posted by Ivy at 5:00 PM