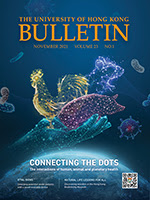 "The Appeal of Machine Justice"
Benjamin Chen
HKU Bulletin
Published in November 2021
Jurisdictions around the world are increasingly using artificial intelligence (AI) to help mete out justice, nowhere more so than in Mainland China. Legal scholar Dr Benjamin Chen has been studying the drivers and implications of this trend.
The Chinese judicial system has put millions of case judgements online and installed machines in courthouses that tell would-be litigants their chances of success. In one sense, this puts legal matters in the hands of ordinary citizens. But at the same time, AI-mediated justice also serves the needs of the Chinese Communist Party (CCP), says Dr Benjamin Chen of the Faculty of Law.
Dr Chen and his collaborator Dr Li Zhiyu of Durham University have explored the implications behind the fervent embrace of AI and information technology in the Chinese legal system. “We’re not saying that technology is being intentionally deployed to achieve the results we describe, only that technology has grown out to fill gaps and respond to tensions latent in the Chinese legal order,” he said. 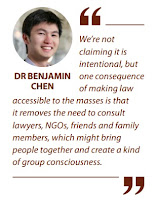 They have identified three such tensions where an AI solution has appeal. The first is quite simple: it addresses the heavy caseload that has arisen from government efforts to professionalise the courts by weeding out under-qualified judges. “In the past, just about anyone could be appointed a judge,” he said. “Judicial reforms have culled the ranks but that means there are fewer judges and they are increasingly overworked. Technology is supposed to alleviate this.”
The second tension relates to strains between social harmony and the law. Law-based order was restored following the Cultural Revolution. But the insistence on legal rights and procedure sometimes worsened social conflicts rather than resolving them, so the government started promoting social harmony and encouraging mediation rather than adjudication. However, the judges were also given quotas, which incentivised them to badger and bully parties into settlement. …Click here to read the full text.
Posted by HKU Law at 3:15 PM