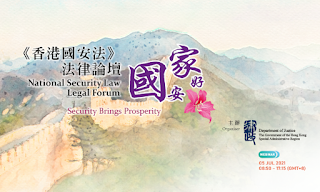 Thank you, Professor Zhu, for the introduction. And thank you to the Department of Justice for asking me to speak at this forum.

In an ideal world, there would be no need for National Security Laws. We live in a wonderful world – but it is far from ideal. We received a stunning reminder of this certainty in Hong Kong in 2019. The insurrection, which grew out of a series of major protest marches, had established traction by early June in that year and it grimly continued for many subsequent months.

In the normal, real world, National Security Laws have been applied in various forms for centuries. The Treason Act, for example, codified the Common Law offence of treason in England in 1351 during the reign of the Plantagenet King, Edward III.

National Security Laws have grown significantly more detailed and complex over time. Context matters. After the 911 attacks in 2001 in America, there was a major lift in National Security legislating around the world – led by the US (though, until last year, there was no such lift in Hong Kong).

Consequently, the scope of the matters to be discussed today is wide. Accordingly, I plan to use my time:

· To summarize key aspects of the Australian National Security Framework;.

· To discuss, briefly, the National Security Framework in Singapore; and 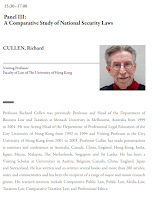